True or False: Your Credit Union Website Should Use Testimonials

Why you should use testimonials

When it comes to making decisions, “Social Proof” is one of the most motivating factors out there. If humans know that other humans are doing something, they will also want to do that thing. We are naturally drawn to what others like and do, and model our behavior after them. (This is why television sitcoms use canned laugh tracks to encourage you to chuckle.)

In 1968, several psychologists conducted an experiment where they had a single man stand at the corner of a busy street and stare up at the sky. Only a couple people stopped to see what he might be looking at. But when they had five people stare at the sky, the number of others who stopped to look increased exponentially. Soon, a whole crowd was assembled. The psychologists found that people simply assumed if several people were looking, there must be something interesting to look at.

The importance of social proof

A recent study in the Wall Street Journal found that people are sometimes even more responsive to social proof than they are to a cost savings or  moral imperatives. Researchers called a sample of people people in a neighborhood and asked them to use fans instead of traditional air conditioning. They tried a variety of persuasive tactics, such as explaining how much money the fans would save them over time or pointing out the positive environmental impact of the fans. However, the most effective tactic was telling them that 77% of their neighbors were already using the fans.

We find the same principle frequently demonstrated online in a variety of different ways: Facebook like counters, share counters, online reviews, and, yes, testimonials. According to Social Fresh, testimonials have the highest effectiveness of any kind of content marketing. We loved this example from Express Watch:

They added testimonials to each of their product pages, showing positive responses from customers.  As a result, their sales increased by 68%.

When done right, testimonials can be an excellent addition to your credit union website. They show your potential members that people are invested in your products and services, invested enough to endorse them. Since many credit unions are locally based, testimonials can also be used to demonstrate community support for your organization.

How you should use testimonials

Here’s an example of a testimonial we used for one of clients, United Texas: 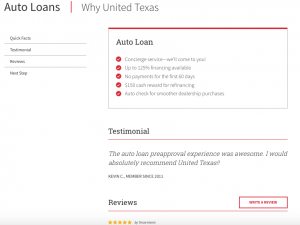 In this example, the testimonial corresponds directly with what the page is about: Auto Loans.

A face adds a level of genuineness to a testimonial. When people see a real person next to the quote, they have more trust in the testimonial. According to Kissmetrics, putting a face to words makes a big difference: “Pictures were found to increase trust among all participants, even when the photos were nonsensical.”

The most effective pictures match the examples we’ve included above. They include these sound sub-principles:

When we think of influencers, we think giant companies and huge celebrities. But you don’t need Harrison Ford to endorse your credit union to have an effective testimonial. In the Hubspot examples above, including the business names  of the men quoted helps make the testimonials feel more official. Using job titles isn’t a bad idea either. If you have locally known companies or CEOs who love your credit union, make that clear to your potential members.

Moz.com explains that if social proof is disingenuous or suspicious, it can actually have a negative impact on your conversions. You may have experienced this yourself, where a product on Amazon had hundreds of glowing reviews in broken English. On the other side of the equation, perhaps you’ve read an overwritten endorsement that seems too perfect because it magically hit every single point the company wanted to cover.

Testimonials take time to collect, but getting more applications for loans and deposits is worth the effort.

Get our crazy ideas and doable tips in your inbox.